RESERVE – Riverside Academy seniors, Abby Bourgeois and Doug Gilchrist, were nominated by Riverside administration after applying to attend a three day summit at the University of Mississippi this summer. The Apex Leadership Summit is an on-campus program where, according to the University’s Office of Admissions, upcoming high school seniors learn “leadership development, team building, and sessions covering ethics and social responsibility, problem-solving, and developing a leadership resume.” All of the attendees were accommodated in the new dorms and interacted with current Ole Miss students and professors during their time at camp.

After being placed in teams with other campers, Bourgeois and Gilchrist participated many activates including community service. Bourgeois and her team went to Memory Makers; a non-profit organization designated to assist people in the community suffering from Alzheimer’s disease and Dementia. Gilchrist’s team went to the Ole Miss Food Bank where they helped deliver and organize cans brought by each Apex camper. Each team also competed in the O’Mazing Race, a scavenger hunt where Bourgeois’ team came in first and Gilchrist’s team placed second. They also built resumes, took a personality test, investigated their potential college majors, and made cards for children at the Batson Children’s Hospital.

“It was eye opening and helped me overcome my fear of talking and opening up to people. And I really enjoyed the community service. It was fun,” Gilchrist said about his time at the Summit. Already a die-hard Ole Miss fan, he took extra time after the Summit to tour the school.

Bourgeois said “it changed her leadership perspective.” As an athlete, “it helps with sports and reassured I am [leading] the right way.” She received the Teamwork Award, Sportsmanship Award, and an award to waive the college application fees if she chose to apply to Ole Miss. 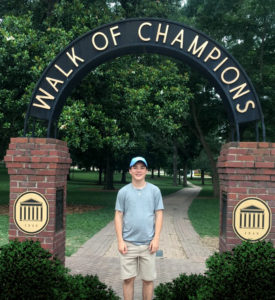 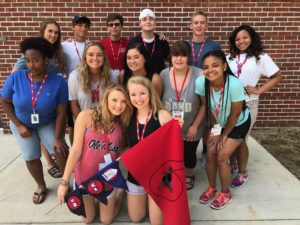